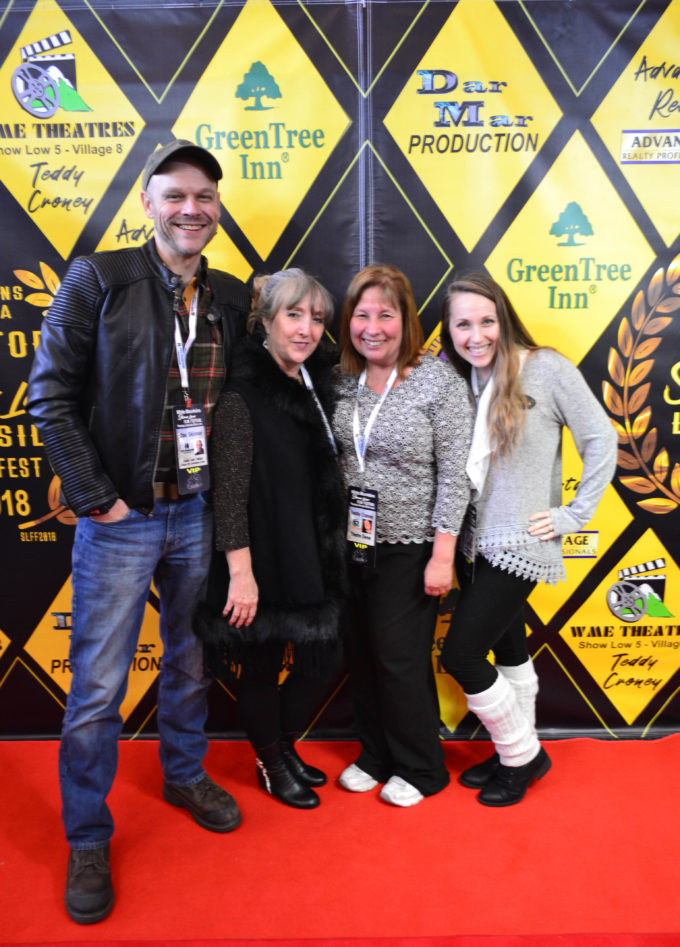 We would like to give a standing ovation to (left to right) Doc Skinner, Martina Webster, Teddy Croney, and Dalea Faulkner for their relentless work to make this event a success that packed the house,

A packed house at WME

Mike Bosley of the Pour Station did a great job emceeing the Q & A segments with the film makers.

Never afraid to lend a hand, the High Country Barbershop Chorus boys took a break from cleaning theaters to get a pic with Teddy on the Red Carpet.

Meeting Writer, Producer and Actress Rakefet Abergel of Jax in Love was beyond cool. It was of no surprise that her horror short took home an award this year

See you at the VIP Party: Saturday night’s VIP was at Torreon Golf Club in Show Low where the Who’s Who enjoyed networking and a complimentary Tequila tasting of musician Roger Clyne’s Mexican Moonshine Tequila.

See you at the VIP Party: Saturday night’s VIP was at Torreon Golf Club in Show Low where the Who’s Who enjoyed networking and a complimentary Tequila tasting of musician Roger Clyne’s Mexican Moonshine Tequila.

The always vivacious WME Theatres owner Teddy Croney and Producer and Director of Wall of Dreams Bruce Endres have a little fun with the paparazzi (that would be me).

On October 11 – 14, the red carpet was rolled out at Village 8 Theater in Pinetop for the White Mountains’ inaugural film festival: Show Low Film Festival. An incredible success, Martina Webster of Darmar Production along with fellow producers Stephany Borders and Dalea Faulkner, local theater owner Teddy Croney, Doc Skinner, Jesse Valencia and an all star cast of local talent brought a real Hollywood experience to our hometown.

A virtual Disneyland for film buffs, this event featureed more than 50 films and ample opportunities to meet the directors and actors. “A film festival is a venue that offers Indie film makers a platform to show their films. Eventually, as the event grows, it could become a platform from which they can also sell their films to distribution companies like Netflix or Amazon,” explained Martina during our recent interview, “Having your film shown on the big screen is something that most film festivals can’t offer to all the films. So, this is really an incredible opportunity. The films range from shorts to to full features. The content ranges across a wide variety of current topics like Alzheimer’s to spousal abuse or suicide or bullying… you name it, it’s there.”

In addition to enjoying the movies themselves, the festival delivered the incredible opportunity to get ‘behind the scenes’ and meet the magic makers themselves. “The great thing about a film festival is that you might see a film and be able to meet the director or actors and next year, the film might make it big and you can say you knew them when. It is a fun opportunity to meet them in the hallways, have pictures taken with them and get autographs. Whatever people think Hollywood is at a film festival, it all comes true in a way,” smiles Martina.

We at the Maverick Magazine would like to congratulate Martina and her crew on a successful first year and many, many more to come.